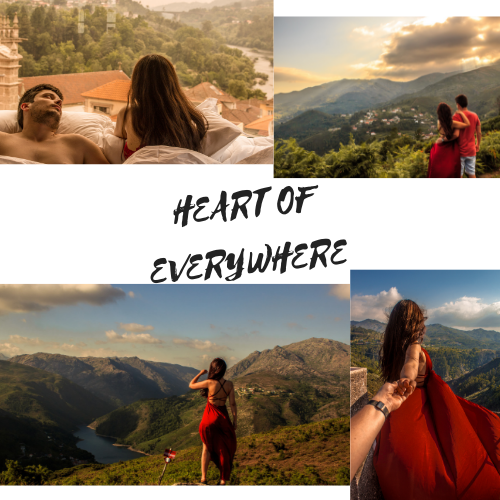 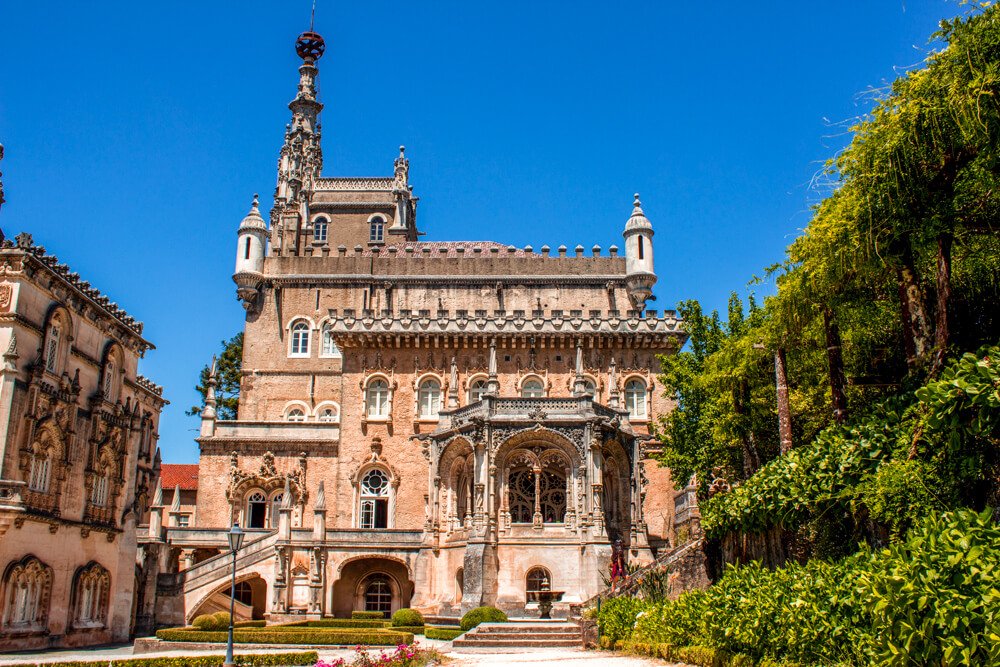 Bussaco Forest – A green jewel in the heart of Portugal

Bussaco Forest is located in Luso, central Portugal.  Did you know that in the sixteenth century, the Bussaco Forest was protected by the Pope´s orders and turned into a monastic retreat?

This earthly paradise is only 32km away from the Beautiful city of Coimbra. While touring this area, you will see lots of signs indicating that you are on the “Bairrada Route”. The best-known speciality of this area is roast suckling pig (leitão à Bairrada).

How to get there?

In this enchanted green paradise you will find:

This palace was built for the last kings of Portugal, in the late nineteenth century but, nowadays, you can stay overnight if you want to. This  is one of the most chaming hotels of Portugal. You can book here your night at Palace Hotel do Bussaco. 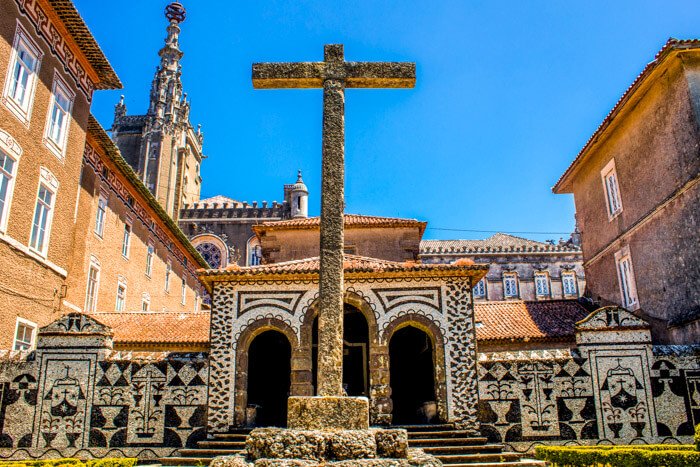 The Buçaco lands were donated to Discalced Carmelites in 1628. The monks built the Convent of Santa Cruz and to demarcate their land they built a wall with more than 5 km. In addition to that, they built hermitages inserted in the woods, so they could devote themselves to pray. 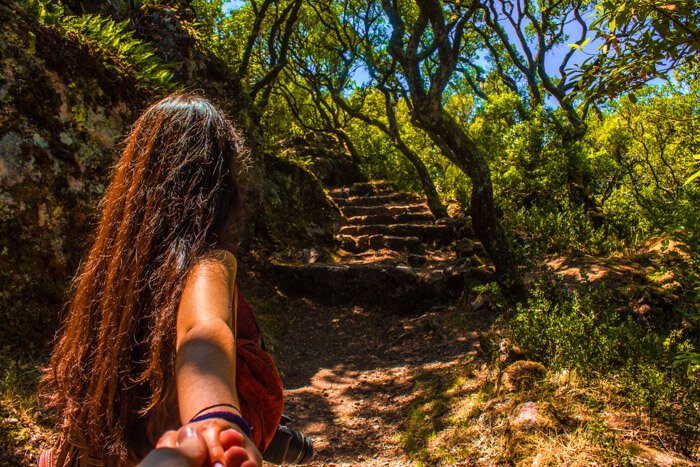 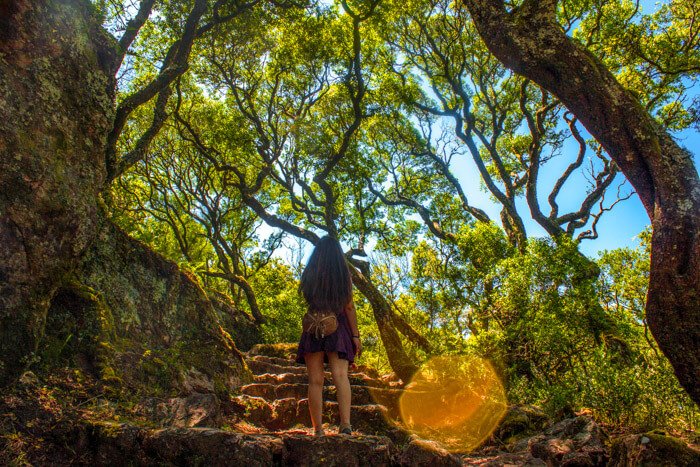 We chose to do the Via Sacra trail. This trail was constructed in order to represent the Steps of the Passion of Christ, in resemblance to Via Crucis in Jerusalem.

Unfortunately, the passage of time doesn´t go unnoticed and many of the chapels are already in a bad conservation state. This route ends next to the viewpoint of Cruz Alta.

While walking this path you will find an abandoned house that could easily go unnoticed. If you decide to enter, you might have a pleasant surprise and enjoy a privileged view of Buçaco Palace and all the surrounding green. In my humble opinion, the view from this viewpoint surpasses the view that you´ll get when you finally arrive to the end of the trail, to Cruz Alta viewpoint. 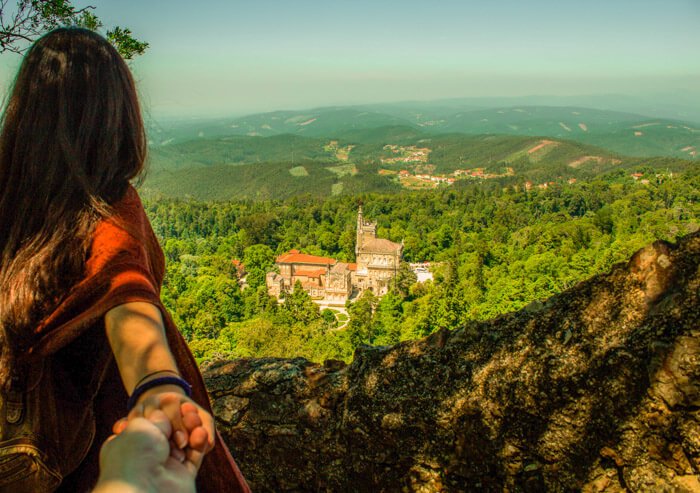 In the same area of the abandoned house, if you explore just a little more, you will discover this cross as well. 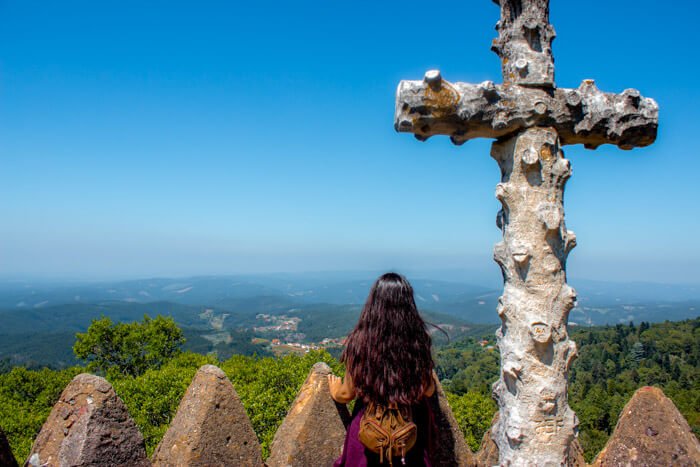 To return, we chose not to simply do the reverse route. We planned to do a bit of the trail that the lady of the information office had recommended us. We kept walking, but soon we realised that we were lost. And, in the opposite direction, to that intended.

In case you end up being lost as well and off the beaten track, don´t worry. The forest isn´t so large in size and, eventually, if you simply kept walking, you will find the way back to a known trail. As the famous Portuguese, Nobel of literature, José Saramago, once said, “The Forest of Bussaco cannot be described, the best is to get lost in it.” 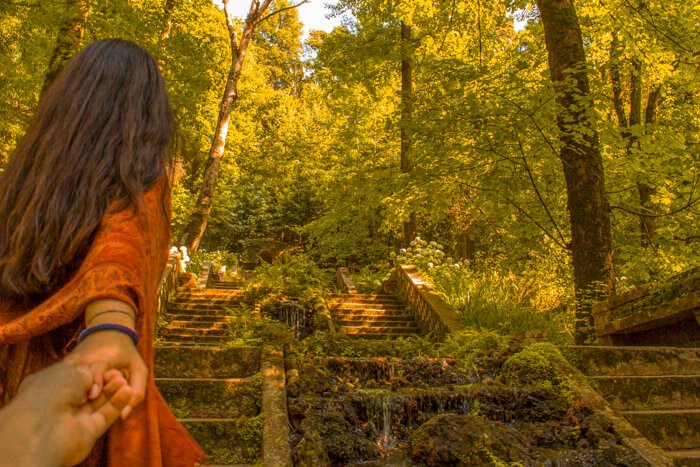 It´s here that the two main water lines in the forest unit.

Bussaco stood out as a key place during the third french invasion. In 1810, it happened the Battle of Bussaco who opposed the Anglo-Portuguese troops, led by General Wellington, to the French troops of Massena. The general Wellington was able to take advantage of the defensive characteristics of the land and defeat the progress of Napoleonic forces to Lisbon.

“The Museum seeks to give a perspective of what the French Invasions were and the fundamental role that the Battle of Bussaco had in the blockade of the Napoleonic forces.” 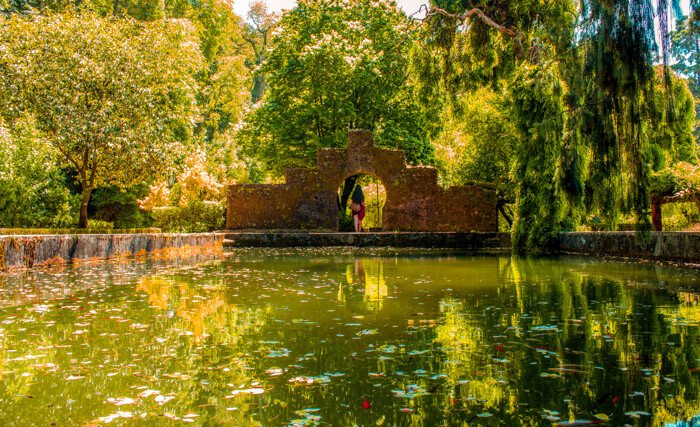 Useful information for those planning a visit to Bussaco Forest

You can see the promotional video of Bussaco Forest here. 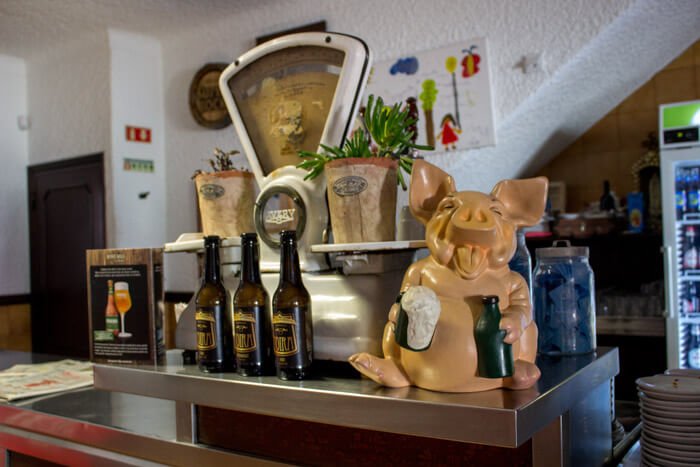 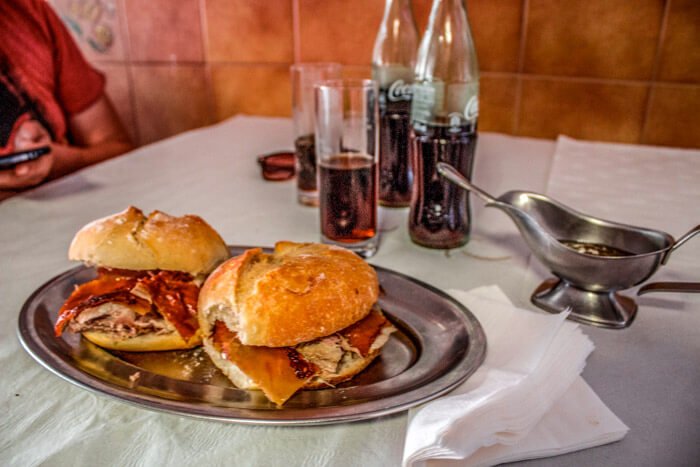 We decided that we couldn´t leave this region without trying the famous “Bairrada piglet” (leitão à Bairrada). When we left Bussaco Forest, we were starting to get hungry. We hit the road, towards Viseu hoping that on the way, we would find a restaurant announcing this “Bairrada piglet”. When we were already in despair due to not finding any restaurants that were visible from the road, we passed by a village called Malaposta. Rapidly, I noticed a restaurant, whose name was  “A Regional”.  This restaurant seemed to have what we were looking for and, indeed, it had. We ordered a piglet sandwich and it was great.

In case, you are craft beer fans you cannot leave this area without tasting beer “Toira” who was born in Bairrada.

Would you like to sleep in a Royal Palace? Then  Palace Hotel do Bussaco or Curia Palace are the perfect hotels for you.

Palace Hotel do Bussaco is located inside Bussaco Forest. Depending on your dates, a double room with breakfast included might cost you only 100€ per night ( low season).

Curia Palace is only 15 km away from Bussaco Forest. On low season you may find a double room with breakfast costing you only 85€ per night.

Staying in the city of Coimbra, located 30km away from Bussaco Forest, is also a great option. In Coimbra you can stay in one of the Small Luxury Hotels of the World- Hotel Quinta das Lágrimas . Another great luxury and affordable option in Coimbra is Solar Antigo Luxury Coimbra. Click here to choose the hotel that best fit your style and budget in Coimbra. 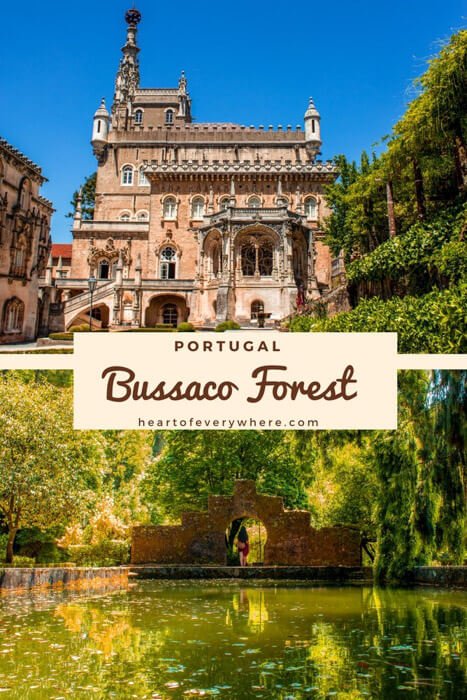 Did you find this post useful? It´s a pleasure to provide free information & advice to our readers.

Disclaimer:  This article contains affiliate links, which means if you book through one of our links we earn a small commission, at no extra cost for you. This commission goes straight to pay our blog expenses & to our vices (food & travel)

Portugal Off the Beaten Track: Hidden Gems To Discover 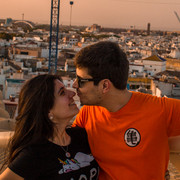